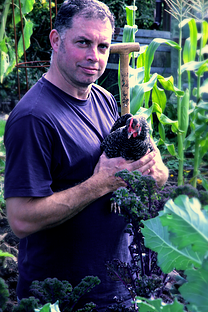 Following a year in his garden, 'The Allotment Cookbook' is a beautiful guide to growing and cooking with the rhythm of the seasons, and has recently been recognised by The Guild of Food Writers who awarded it 'First Book Award.'

From Fishcakes with Wilted Chard to Stilton, Pear and Red Onion Tart, and from Rocket Pesto with Sirloin to Panna Cotta with Poached Rhubarb, each delicious recipe is a celebration of locally grown produce, inspiring you to eat well every day of the year.

Make sure you join Pete for his Talk and Tastings and his chef demo on Saturday 9th September.